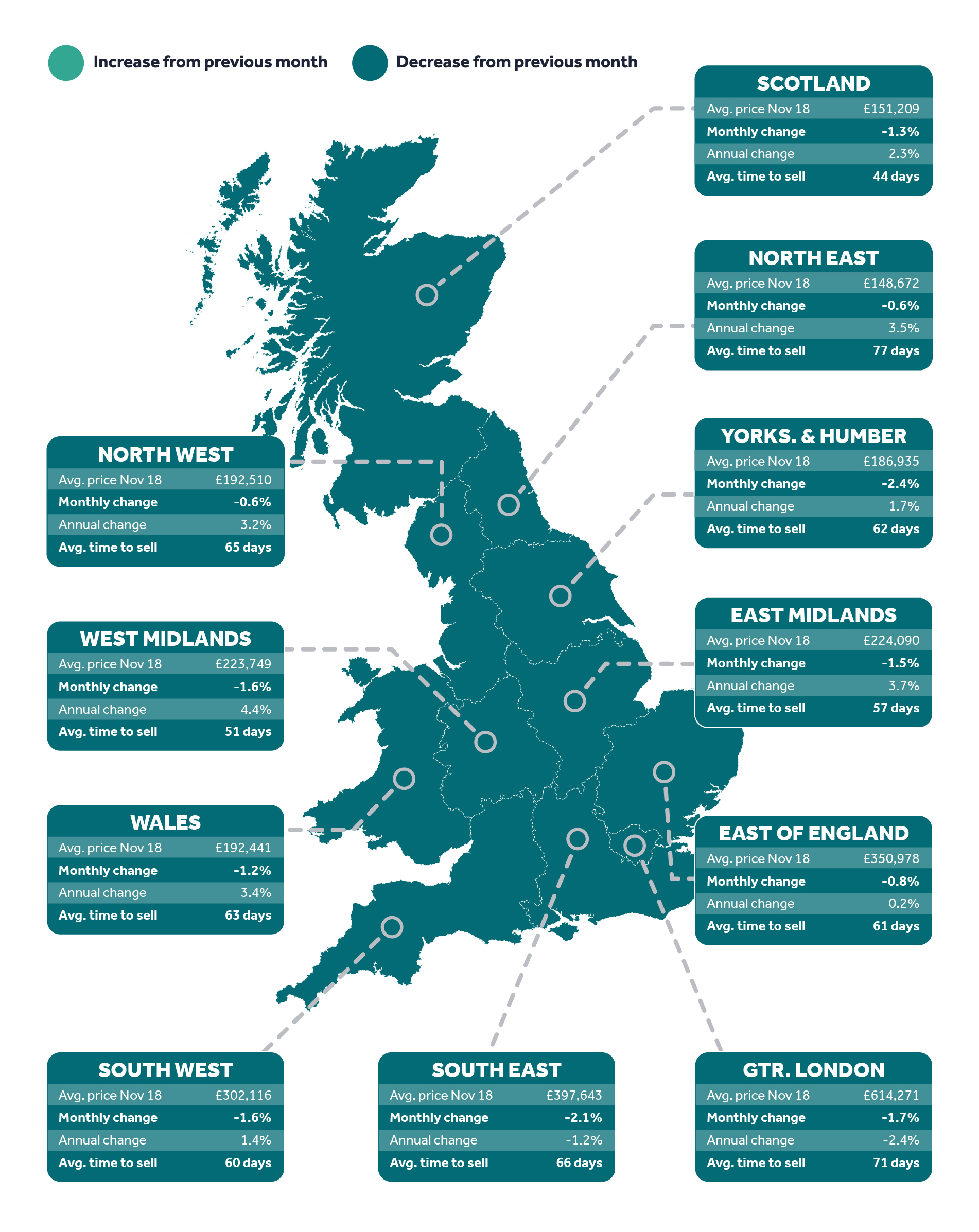 Rightmove has just released its latest figures for the sales and lettings market. What the report confirms is what we're seeling locally in the Farnham and Aldershot property markets on a daily basis. Realistic sellers are still gatting results!
The market is at its weakest since 2011. Its not a surprise that there is turbulance in the markets given the political uncertainty. With 27 years in the local market Castles have worked extensively in similar markets and plenty worse!

The overview is below. For specific advice on what's happening in your road contact your nearest Castles branch.

The price of property coming to market falls by an average of 1.7% (-£5,222) this month. It is the norm for new seller asking prices to fall at this time of year to attract buyers who are increasingly distracted by the run-up to Christmas. However, this is the largest drop in the month of November since 2012. The backdrop of cooling markets in the south and in the upper price sectors, combined with the political uncertainty, has resulted in new sellers lowering their asking price aspirations earlier than usual. Encouragingly, slightly more sales have been agreed than in the same period a year ago.

Miles Shipside, Rightmove director and housing market analyst comments: “New sellers and their agents are reacting to market forces and lowering their pricing aspirations by more and sooner than usual. Stretched buyer affordability and the cooling markets in the south and in upper price brackets have combined with the ongoing political uncertainty to change pricing optimism into pricing realism. This is a welcome effort by sellers to minimise the usual pre-Christmas market slowdown. Some new-to-the-market sellers and their agents have acted early to try to improve the buying mood and avoid the traditional “buyer humbug” dislike of Christmas housing activity.”

All regions see a monthly fall in the price of property coming to market, with most of the largest falls in the south. After Yorkshire and the Humber, the second largest monthly faller is the South East with an average 2.1% fall (-£8,647). Some of the more expensive towns in the London commuter belt which had seen over 40% price rises since 2011 unsurprisingly have significant price falls. London new seller asking prices drop too by 1.7% (-£10,793), though this is not unexpected since the capital generally sees greater seasonal price volatility than the rest of the country.

Shipside observes: “Seven years ago price rises started rippling out from the capital into the commuter belt in the South East. That ripple effect has now been reversed, with some of the London market price re-adjustment reverberating out into the commuter belt. New sellers of property now coming to market in this region have belatedly lowered their price sights. Higher end former hot-spot towns are now among the biggest annual fallers with Rickmansworth (7.1%), Esher (-6.4%) and Gerrards Cross (-6.0%) now cold spots following price rises of nearly 40% over the seven preceding years.”

These factors have contributed to the first national year-on-year price fall since November 2011, with the price of newly-marketed property now 0.2% (-£607) cheaper than 12 months ago. With the supply of new-build houses remaining tight, a low interest rate environment combined with near record employment, and average wage increases now rising faster than both CPI inflation and average property prices, the underlying fundamentals for a stable property market remain sound. Indeed the number of sales agreed by estate agents was up in October 2018 compared to October 2017, albeit by a modest 1%.

Shipside notes: “While many thought that the down-to-the-wire Brexit deal uncertainty would hold people back from buying, more buyers have actually jumped in. Some buyers see this pre-Christmas price lull as a gift to their negotiations. It proves that people need to get on with their lives and will continue to buy homes if the underlying economic fundamentals remain strong.”